Like every month, also night sky in July will bring us unforgettable moments. But this month is truly spectacular! The summer on the Northern hemisphere is the perfect season to observe the night sky, especially for those who don’t want to freeze outside during the long winter nights. July will be something like an entrance to the nights full of meteors. Why? Well, let’s look at it gradually. 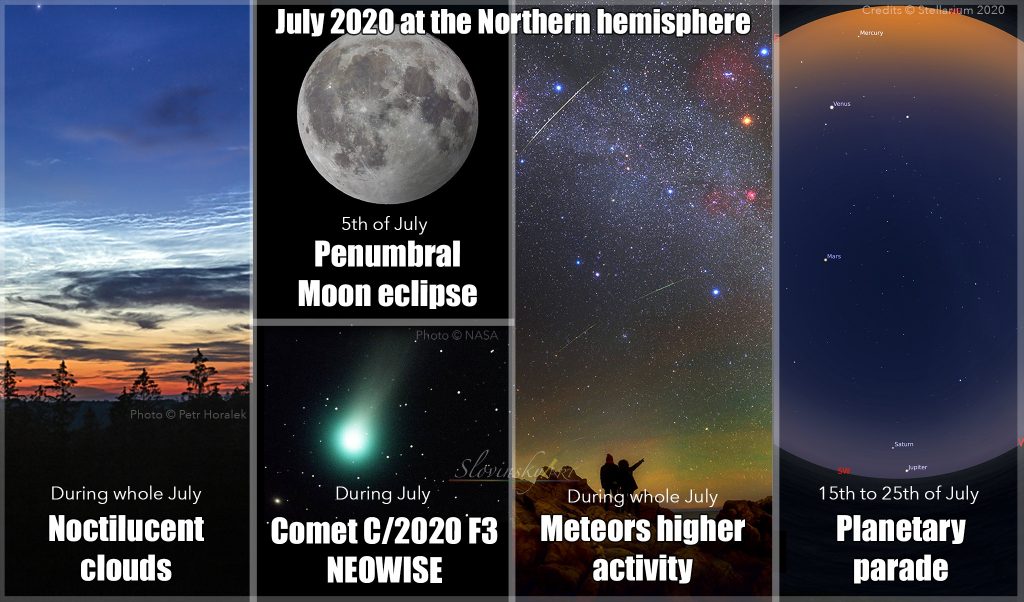 The season of the night-shining clouds isn’t at its end! July is the second and also last month we can observe this phenomenon.

What the NLC’s are?

These fabulous clouds appear in the evening and the morning sky. When Sun is just 6 to 16 degrees under the horizon, the NLC begins to shine. From nautical to astronomical twilight. The noctilucent clouds occur in the mesosphere in altitude about 85km above the ground, while the ordinary clouds occur in altitude just up to 10 km. It’s actually frozen ice particles with dust lit by the Sun. It’s forming due to human industrial activities, and also due to the dust from the comets (meteor showers) and cosmic junk. (Photo Petr Horálek) 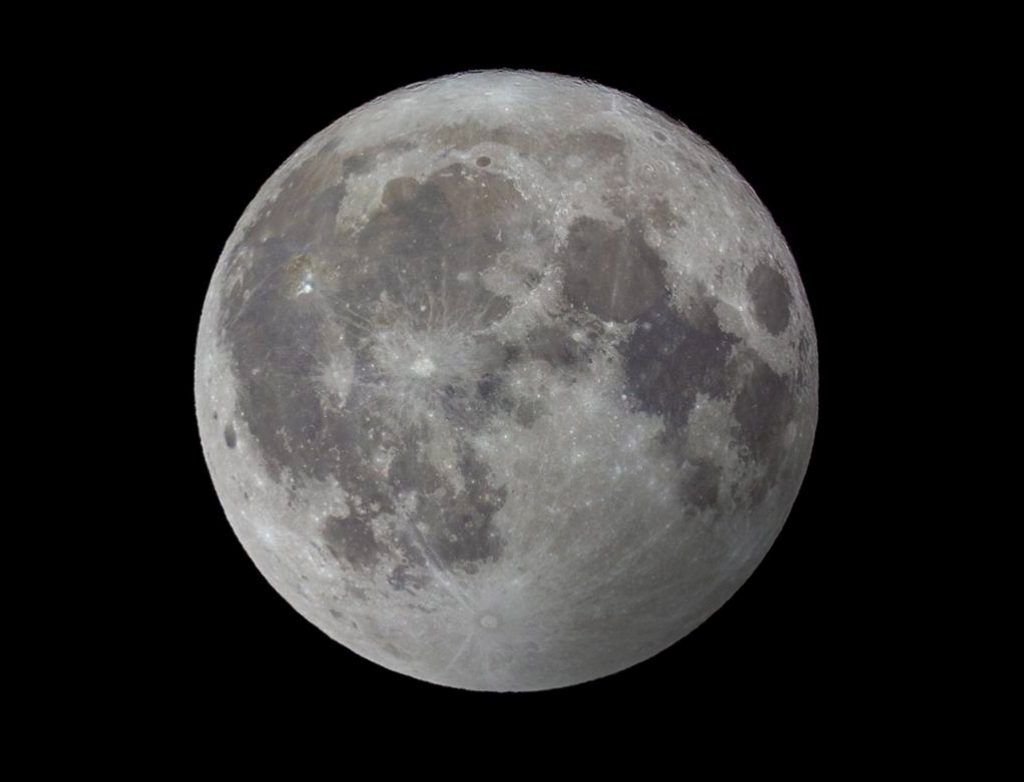 This penumbral eclipse, as a June’s eclipse, won’t be significant. On the 5th of July, all Moon surface won’t be immersed in the Earth’s shadow, but only it’s part will be fainter than ordinary. All its duration will be from 03:08 UTC to 05:53 UTC. The show will be visible especially from North and South America, Africa, and South Europe.

Milky Way over the zenith 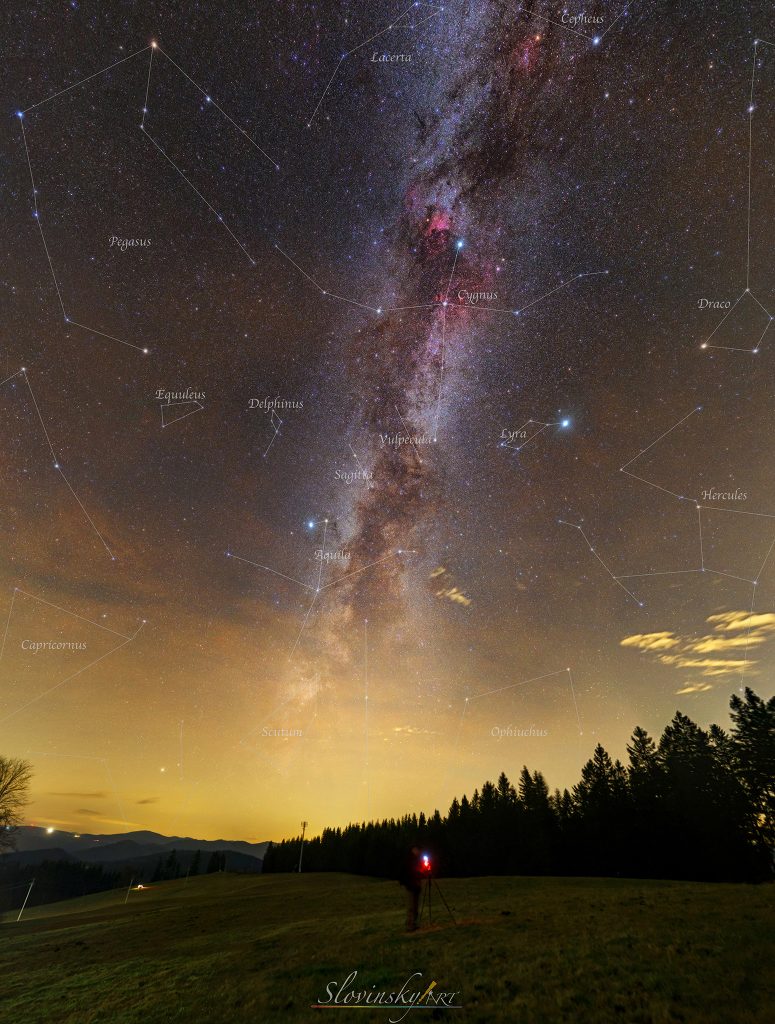 Throughout the Year, we can observe different parts of our home Galaxy, where we live. Especially at the Northern hemisphere, the best months to observe its beauty are from March to October. Why? Cause then We’re looking towards its core – its brightest part. In the dark sky, We can easily observe it by the naked eye. During July, the Milky way will approach the zenith. You don’t know how to find it? Well, just look over Your head 😉 That’s our home harbour.

Third hopeful comet this Year coming. After the disappointment of comets Atlas and Swan, the third candidate on the best comet of the Year 2020 looks incredible yet. Is there a chance that the comet will withstand approach to the Sun? It looks it really is and it’s more likely than not. Today, on the 3rd of July the comet flew past the Sun. And in the next days, we will definitely know the destiny of NEOWISE – probably the best comet of last years! Especially, in the second part of July, the conditions of the observations should be great due to the Moon set and higher position in the sky. At the beginning of July, the comet will lie in the Auriga constellation and as the days will go by, it will slowly approach the Ursa Major constellation, where it will be located at the end of July. Let’s look at the comet’s path!
Graphics: Petr Horalek/Stellarium 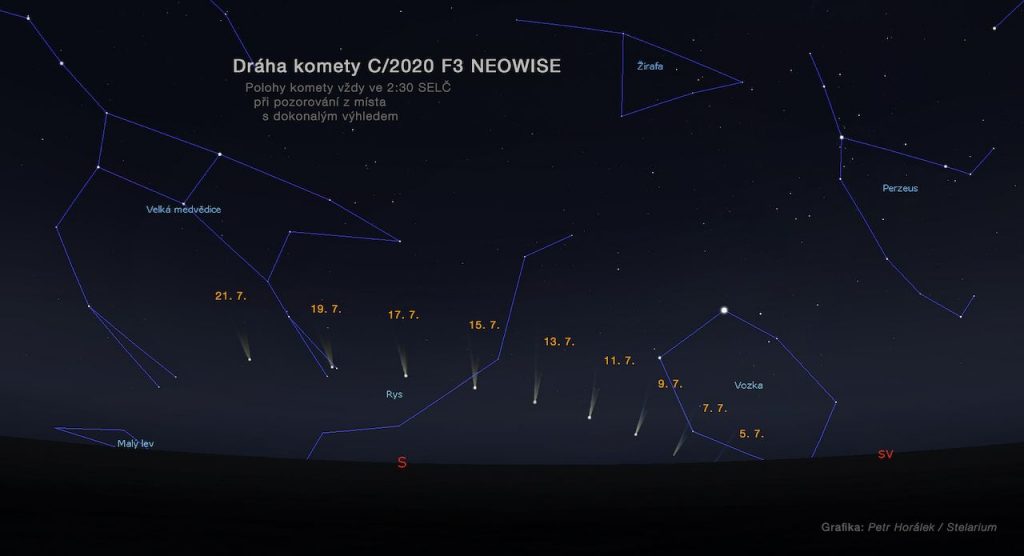 One of my fav events in July’s sky. The planetary parade, like a brighter comet, isn’t an ordinary annual event. But unlike the comet Neowise, this celestial show is more than predictable and there can’t occur anything that could break this amazing and spectacular view. Just imagine. Five planets in a row, just before the dawn! Jupiter, Saturn, Mars, Venus and Mercury. Like a crazy celestial train, the planets will lie on an arc of ecliptic among the night sky. The only things You need to observe it are a clear sky and a good view just slightly above the horizon. You don’t have to go far from the cities because of light pollution. These objects are truly bright! The best days to observe it are about the 20th of July, but You can even see it from 15th to 25th of July. And it’s not over! During July, there are more beautiful conjunctions and planetary oppositions. Which? 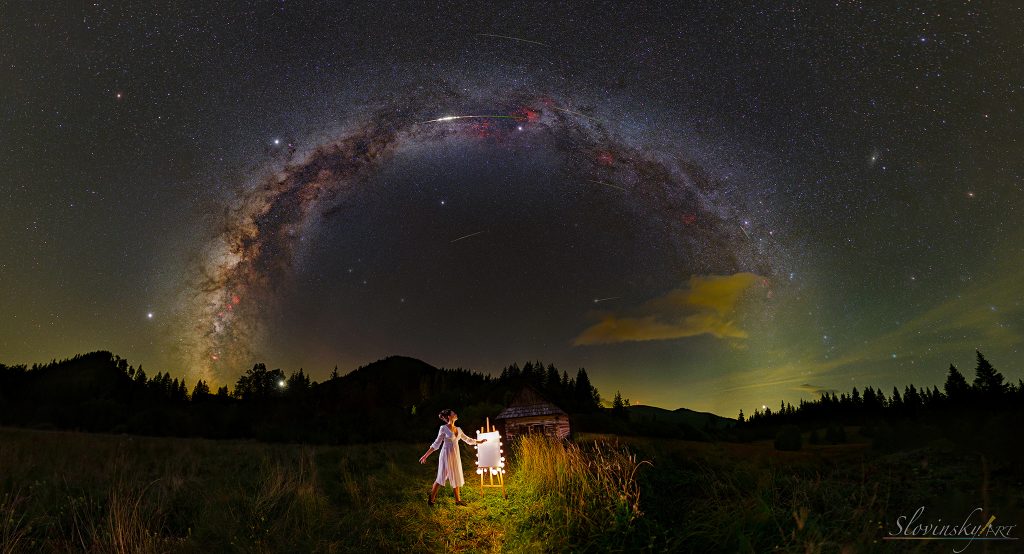 Compare to the last month, July will be much more interesting in numbers of meteors flying along the night sky! There are few active meteor showers visible in the Northern hemisphere. It’s more than likely if You’ll spend a night under the night sky, You’ll see a  “shooting star“!  Don’t forget to keep Your wishes!

These showers peak about July: 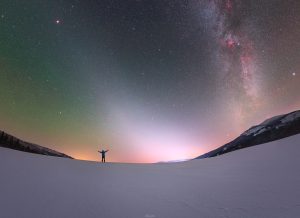 View to the vast mirror

Are You Confused by the name of the image? Just read the description below. As the winter starts in the 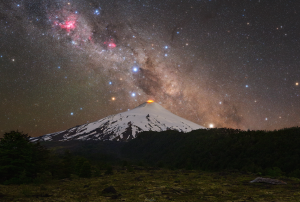 If You have not ever seen the Southern sky, I can tell You it’s significantly different and truly amazing. In 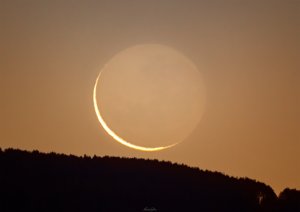 The year 2020 was so difficult for everyone and it will be registered in future history. I think it’s not 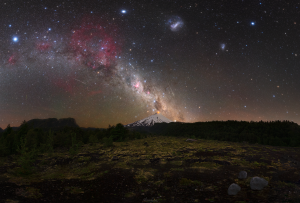 Southern gems above the volcano

Please, enjoy the Ultra High Definition panorama taken from Chile, under the Villarrica volcano. If the photographs could speak, this