In July, something which came from a remote part of the Solar System got the attention of astronomers, photographers, and also the general public. We had a chance to watch the brightest comet of Northern sky after more than 20 years – the great comet Neowise. 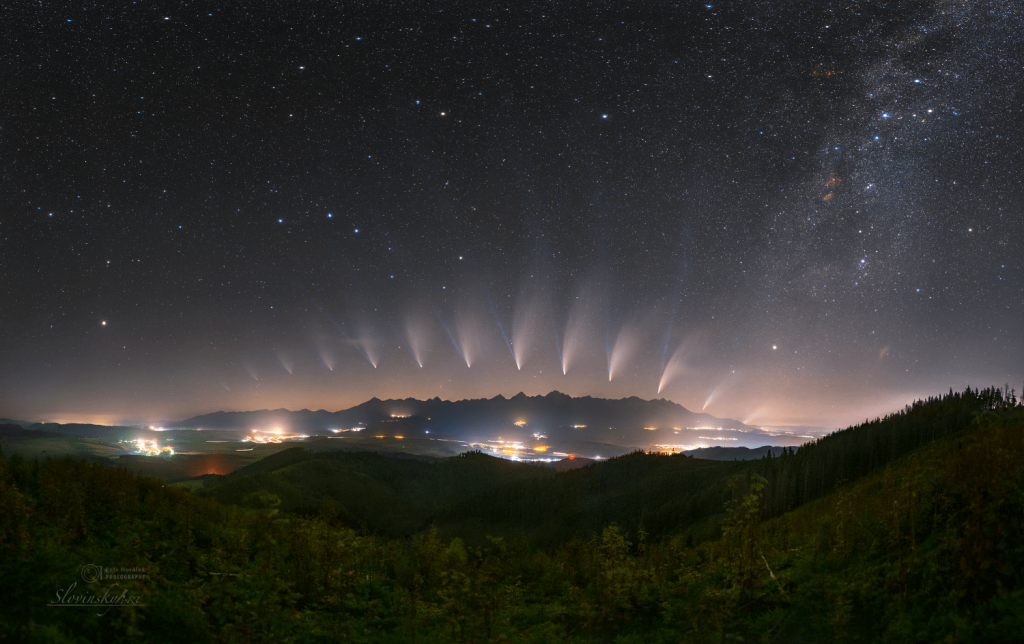 A year full of disappointment and happiness 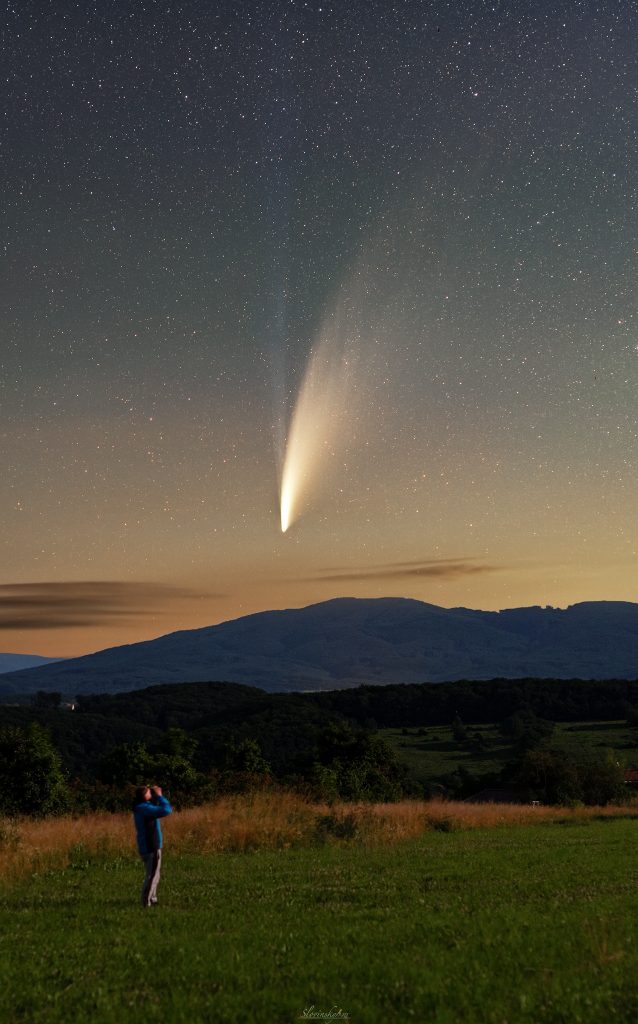 In 2020, we were expecting more promising cometary hopes. At first, the comet ATLAS caught the attention, but in a close approach to the Sun, comet’s nucleus broke, as well as our hopes for a great experience. All our expectations moved on to the comet SWAN, the second hopeful object of the year 2020. SWAN wasn’t supposed to be as impressive as the comet ATLAS, but yet astronomers were still fascinated by these fabulous objects. This comet had also proved that comet prediction may not always be successful, especially when the comet SWAN experienced the same destiny, as the comet ATLAS. After that, at the end of March 2020, cosmic device NEOWISE (Near-Earth Object Wide-field Infrared Survey Explorer, operator NASA / JPL / CALTECH) found a new comet, which was eventually named after the device. In the beginning, the comet looked only like a faint object with the brightness 17th magnitude, which is deep below the capabilities of high-mid astronomical devices. Comet Neowise or C/2020 F3 appeared in coronograph SOHO between the 22nd and 28th of June 2020, which is still monitoring the solar corona activity. On the very first shots, the comet looked immensely interesting, and many people guessed, that if the comet survives its wild fly-by near the Sun, the 17th magnitude won’t be its definitive brightness, and we can expect something special. After a disappointment with the first two comets of the year 2020, we were waiting for the final result.

Photo Tomas Slovinsky – Observing the comet Neowise over the Novy Salas, Slovakia on the 13th of July 2020 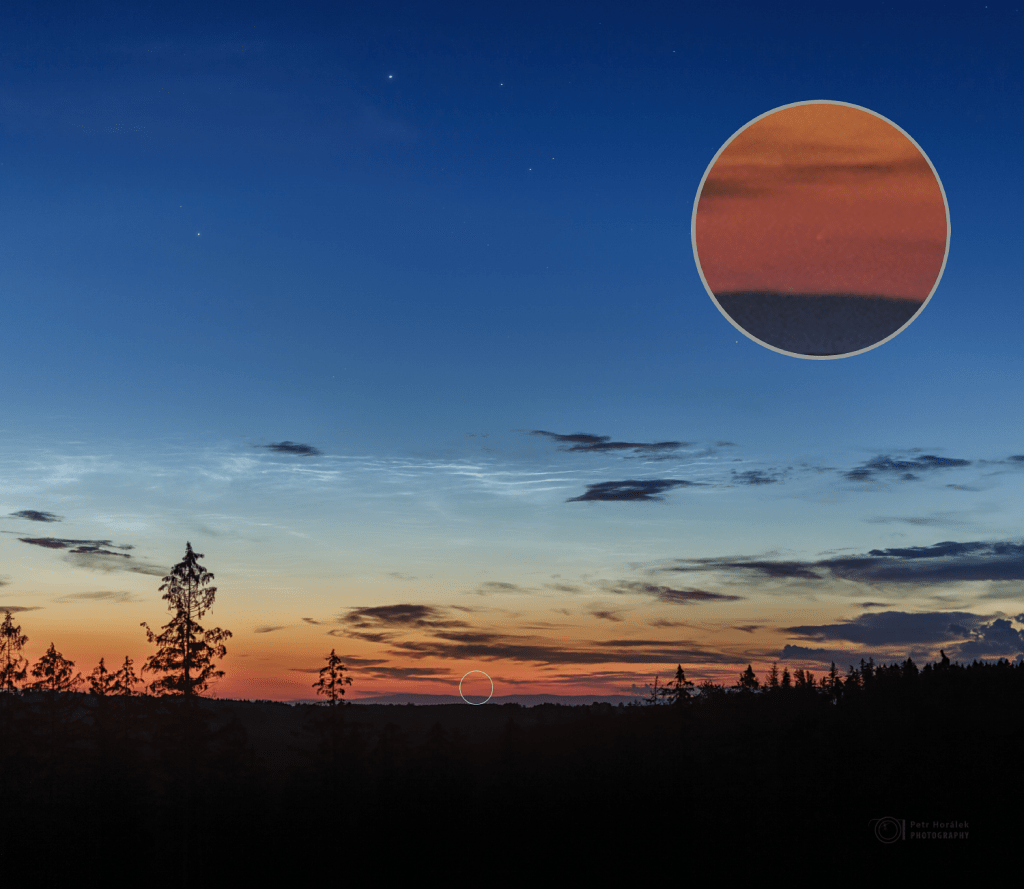 didn’t let many astronomers sleep. Thanks to one, who took the very first photograph – Petr Horalek we knew, that the comet is still alive, and it even survived the most critical days. Comet made its closest approach to the Sun on July 4th in the distance 0.29 AU (AU- Astronomical Unit = 150.000.000km) – which is closer than Mercury. During the first observation days, astronomers just hardly hid their excitement. In the beginning, the comet was challenging to observe with the inexperienced naked eye, but the fact, that it was visible just before the sunrise proved how bright the comet actually was. We could already say:  What the heck, it will be something! After that, it became well visible quite fast – during dawn hours – and even easily photographed, as it was really bright (on the right in the mosaic). No wonder, that with brightness up to 1st magnitude in the first days, the comet was brighter than stars in the Big Dipper asterism. We haven’t seen such a bright comet for more than 20 years in the northern hemisphere! The last famous comet was the comet Hale-Bopp observed in 1999.

During the first days of July, we didn’t have to travel far away from big cities, because Neowise was so bright, we could even enjoy it from light-polluted areas. The comet was still disturbed by moonlight, but it quickly became visible in nighttime showing longer and longer dust and ion tails. At that moment, the comet honored everyone, who went on a journey for the dark sky. Both tails were nicely structured and easily visible to the naked eye.

Photo Petr Horalek – first observations of the comet surrounded by the NLCs over the Czech Republic, 4th of July 2020

Fabulous visitor in its all beauty 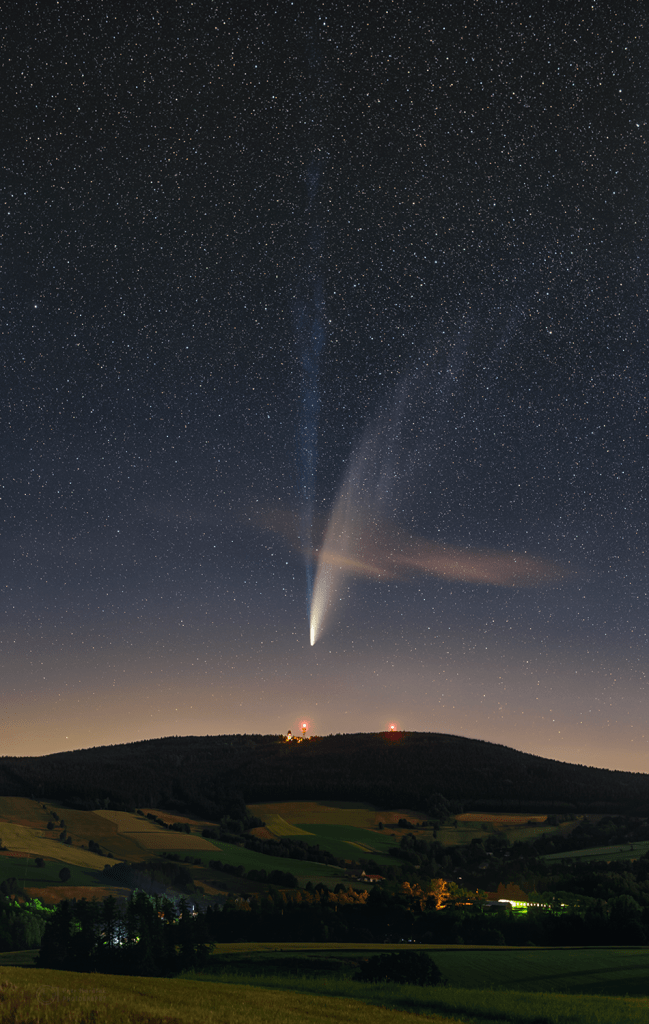 During mid-July, the comet became best visible as it was still affected by solar wind and also close to the Earth. On July 23rd, it approached the nearest point to the Earth, in the distance 0.69 AU. Its ion tail was the longest, photographically over 40 degrees in the sky, but in fact, a few million kilometers long. After that, the comet beautifully moved under the well-known asterism – the Big Dipper. Observers could enjoy both tails, even with the naked eye, but we could see some structures with a small binocular, too. After such a big show, it started to dim rapidly, and the Moon disturbed our view of this beauty again. The change of the comet’s head is also interesting. First, it was bright and yellow-white as it was mostly surrounded by dust from the comet’s nucleus. However, after July 23rd it became greener and greener as the gas of coma was the main source of light.

Photo Petr Horalek – Neowise’s long tails over the Suchy Vrch, the Czech Republic on the 14th of July 2020

And the idea was born

Such an interesting “visitor” from the remote part of the Solar System really doesn’t come by that often. 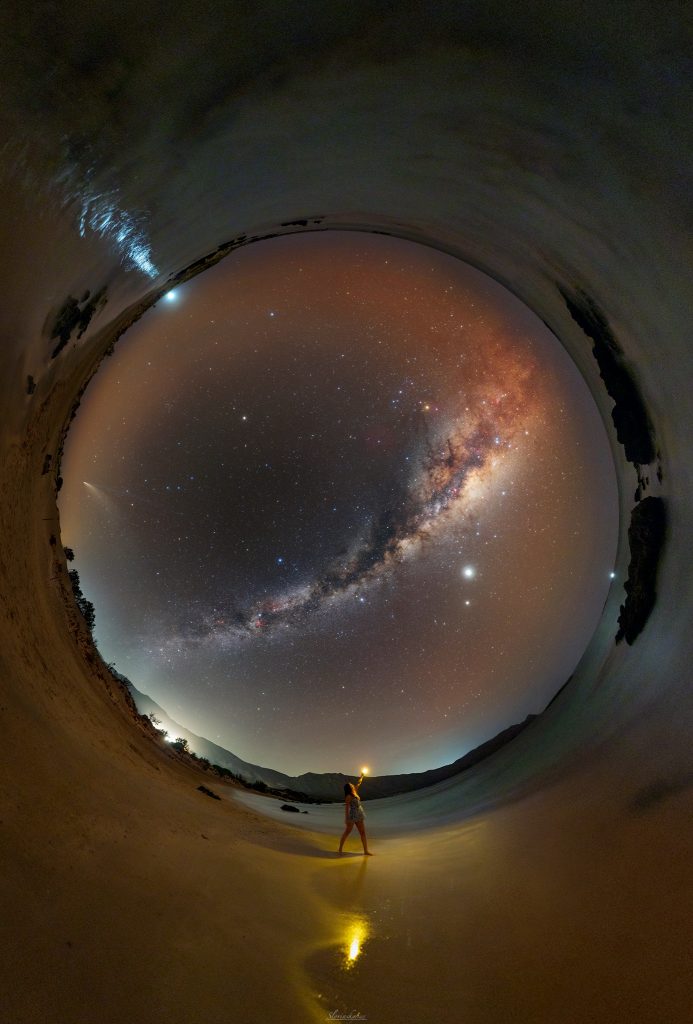 For that reason, two astrophotographers – Petr Horalek from the Czech Republic, and Tomas Slovinsky from Slovakia decided to catch all “her” beauty for almost the whole month. The fact that it would be a challenging project was known since the beginning, before the realization. The weather in the Czech Republic and Slovakia is sometimes changing fast and even one day without data could mean a definitive fiasco for the project. Both photographers were equipped with the same gear and with the same settings agreed in advance. In the beginning, both of them collected a lot of data of the comet itself – from their home countries. They traveled a lot of kilometers for a clear sky without clouds, and sometimes it was a real struggle. During the best days of the comet, despite the pandemic situation, Tomas went on his expedition on Crete, Greece, where good weather is almost a security, not an uncertainty. It was indeed a good decision because at that time the weather in central Europe (including the Czech Republic) made the documentation almost impossible. The data from Crete saved some days of data collecting.

The Slovak and Czech forces joined together

The image is the result of the sophisticated cooperation of two astrophotographers. The brain behind the idea is Petr Horalek, but they both had a plan to cooperate for a longer time. So, how was it all made? Just the foreground image costs a lot of endeavors. Tomas Slovinsky took the leading part in its creation. The foreground for this mosaic was not chosen by chance, in fact, there was really thoughtful reasoning behind it. Due to that, comet’s path took the shape of an arc over the northern horizon, perfectly fitting with the Slovakian High Tatras mountains, which is a very important astronomical site. On the Lomnicky stit summit, you can visit the highest placed astronomical observatory of Slovak Academy of Sciences in 2.634 meters above the sea level. Below Lomnicky stit, there is also Skalnate Pleso observatory. In 50′s, a famous Czechoslovakian astronomer Antoním Mrkos discovered several comets from here using only military binoculars!

To achieve the perfect composition, it required to find an exact geographic point, from where the comet’s path would perfectly copy the Tatras peaks. Such an effect could only be reached from one place – the Kozi Kamen mount placed between High and Low Tatras. Easily said, yet harder to realize. We waited for almost a month for suitable conditions without a moonshine and clear weather, when the unique opportunity finally occurred. It takes a certain dose of courage because Kozi Kamen mount is surrounded by bears, even in large numbers. Besides the trip itself, a beautiful sunset and sunrise, Tomas was also honored by beautiful dark night sky and happiness about collecting the right data to make this panoramic image possible. These data brought joy to both photographers, but they knew that the key role is just ahead of them, and the difficult post-process awaited. Creator of the idea, Petr Horalek, grabbed this role and gave the “breath” for the final image. He mathematically processed all comet’s data for many days and then registered the comet to the foreground image. The physical correctness of the image is in the first place, and for this reason, the post-process took a lot of effort.

Changes of the Neowise

The mosaic shows the comet from July 9th to August 2nd (in UTC time; in Central European Summer Time. The last two positions would be August 1st and August 3rd because the shooting took place after midnight due to less moonlight). It is almost a month path, with the position of the comet every second day. You can also notice the Milky Way and some deep-sky objects on the right of majestic Big Dipper asterism closer to the center.

For the foreground of the mosaic Canon 6D modified, Sigma 50mm, f2.0, ISO 10000, 70x8s panorama from a tripod with Optolong L-Pro filter for the light pollution suppression was used. For the comet itself, it was everyday shooting with 50mm (f2.2, ISO 1250, 30s exposures) or 24mm (the same setting to get the whole ion tail) using Vixen Polarie, and Sky-Watcher Star Adventurer mount. 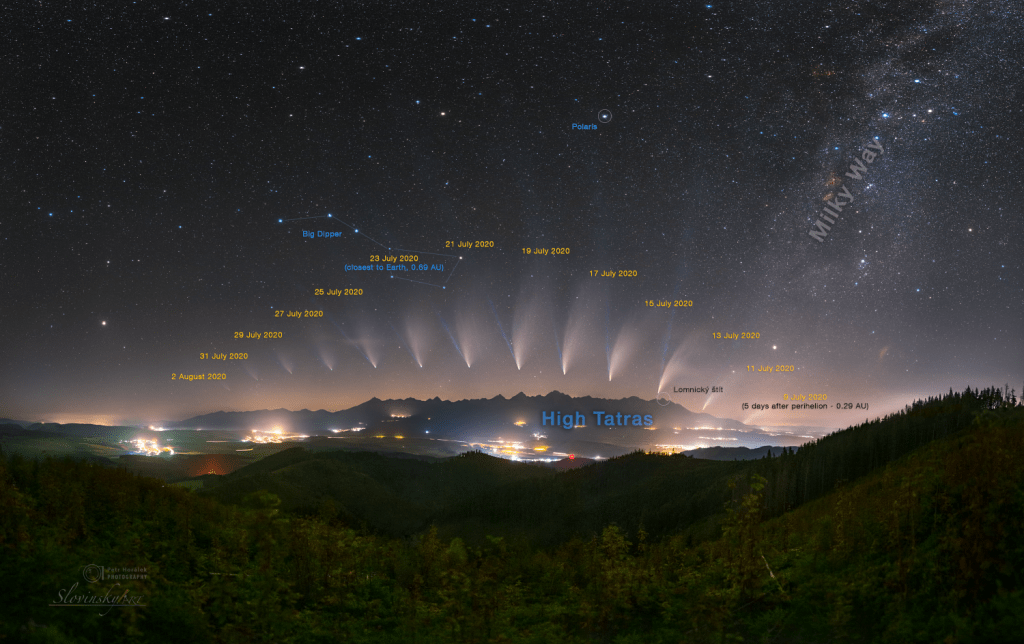 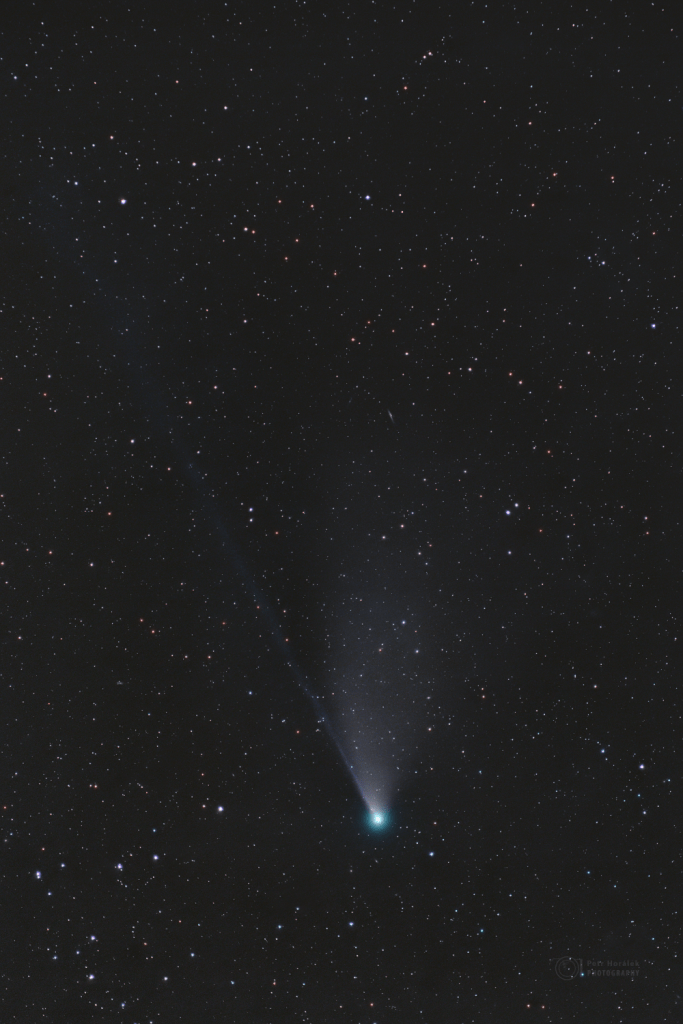 The effort lead to the creation of this unique image. It captures a whole behavior, path, and the metamorphosis of the stunning comet of the year 2020, which will be in our memories for a long time. We are truly glad that we could participate in this sophisticated project and bring something special.

Authors of the article: 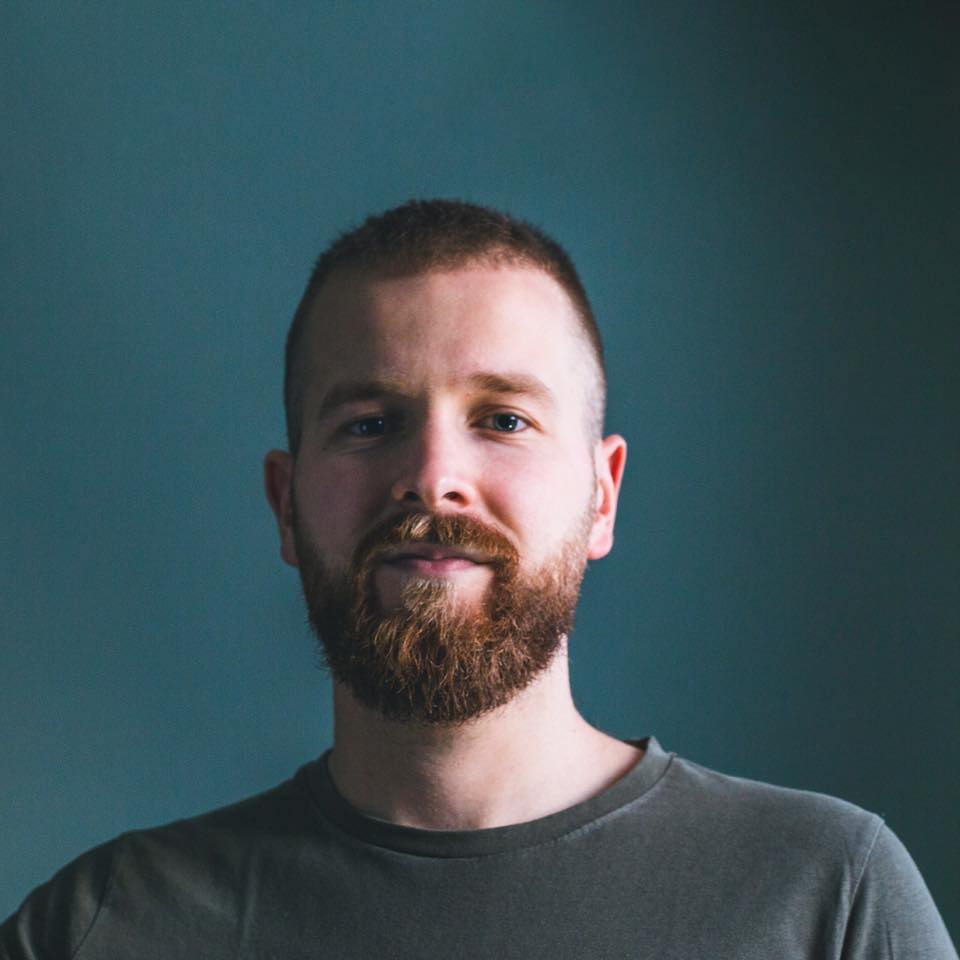 1994, Slovakia
Astrophotographer, astronomy popularizer, lecturer
Director of Association Astronomy for all
Honored by NASA’s Astronomy Picture of The Day
Featured by BBC Sky At Night, TWAN – The World At Night 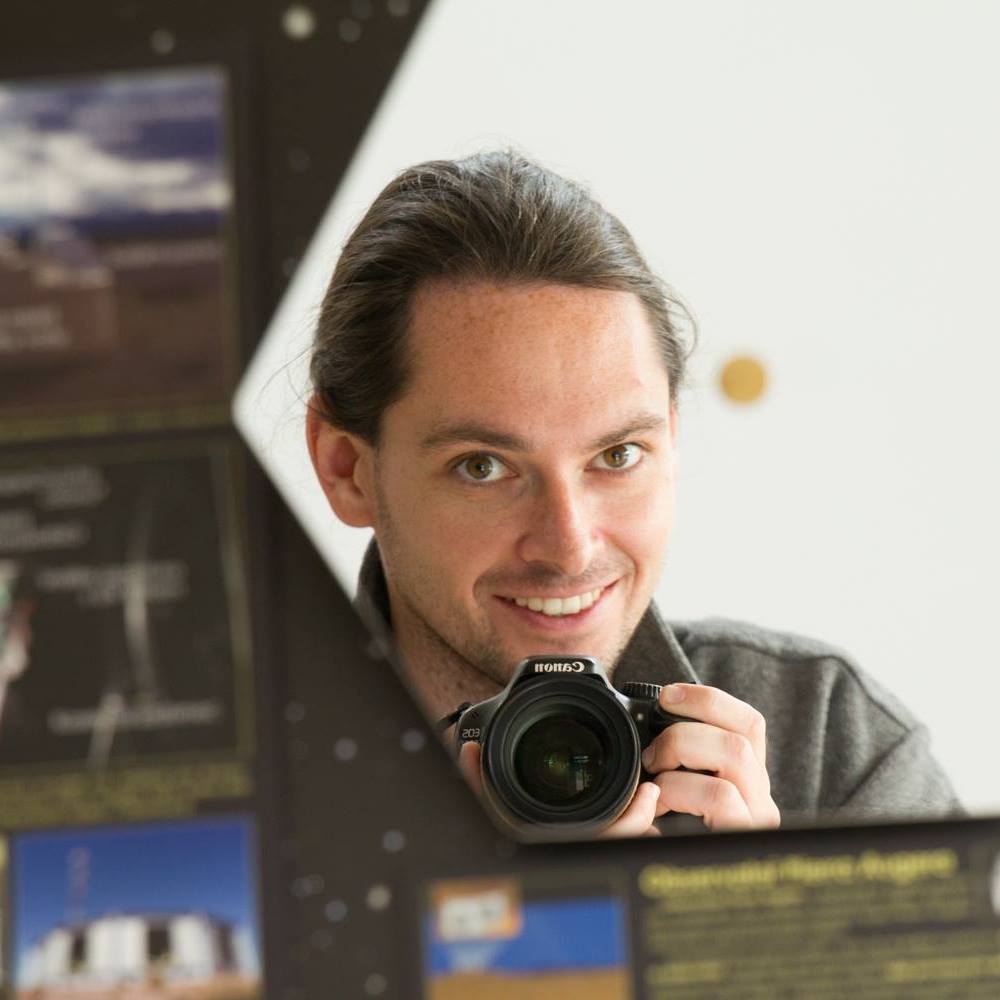 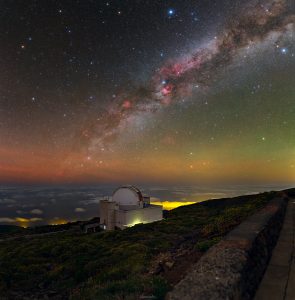 In the dark seek a light

A simple sentence has a much wider meaning. Most powerful telescopes today are built under the darkest world’s sky. But 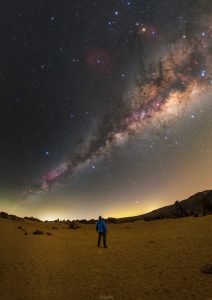 Watching up the night sky is so natural for us. And even it’s free, for many people only an unimaginable 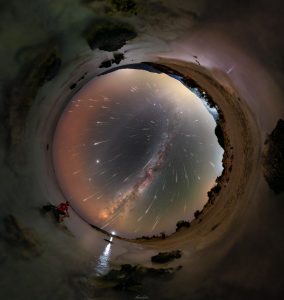 From sand to cosmic dust

Do You feel confused about the photography name? This description is right for You. Our planet disposes of many beautiful 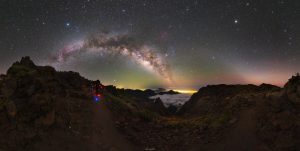 Dramatic universe over the caldera

This is one of my most favorite shots I have ever taken. The photograph comes from La Palma – the

Read More
16. September 2021
Back to home
PrevPreviousPath of the comet Neowise
NextCamping under the starsNext